When I was a youngster, about the age of twelve, there were few factory accommodations for proper length of pull in centerfire rifles. A tough row to hoe if you were “gifted” with short upper arms and more typical lower arms. It’s a genetic thing. The problem is, the stretch to reach made a proper hold impossible. The supporting hand came close to falling short of forearm checkering and the arm extending to the trigger finger was at too shallow of an angle. The solution was found on the business side of a cross cut saw, or removal of a recoil pad. The former made for a problem when I grew up, the latter, a temporary cause of contusions, AKA owies.

Eventually I grew into a form that worked with a 13.75″ length of pull, scoped, 8.5 lb rifle, but then I matured. In the winter I bundled up in clothes suitable for sub zero Maine weather, which added an inch or so of padding to the front of my shoulder. Additionally, while physically fit, I no longer enjoyed hauling around a rifle of excess weight. Yes, children and mature people do share common attributes, even though one is looking forward to life with unbounded enthusiasm, while suggesting the other is more or less circling the drain.

Built to serve basically everyone

The arrival of the Hawkeye

I was going to make a Mash TV show reference, but I figured that would just raise questions, like “What is Mash?” and maybe a few “What’s a TV?”.  You young people. In contradiction to the comic book / video game world we now live in, Hawkeye is the woodsman, hunter, and scout hero in James Fenimore Cooper’s novel, “The Last of the Mohicans”. Factually, in the book, the character’s real name is Natty Bumppo and he named his rifle “Killdeer”. I am pretty sure Ruger was going to the essence of the character, hence the use of his nickname. I can also understand why, in today’s vegetarian, hug a moose society, the thinly veiled faux pas of a rifle’s name would not pass muster. So “Hawkeye” it is.

Ruger’s Hawkeye, if you’ll forgive me for getting back on track, was introduced in 2006 when Ruger began to phase out the predecessor Ruger M77 Mark II product line. As an evolutionary product, the Hawkeye retained the Mark II’s: Mauser type controlled round feed with claw extractor, 3 position safety, steel hammer forged barrel, hinged floorplate, free Ruger proprietary scope rings. New features introduced with the Hawkeye were the LC6 trigger, a thinned walnut stock and snazzy new red recoil pad. Yes, I did use the word “snazzy” and without double checking its definition as its use just felt right word. The compact version of the Hawkeye was introduced in 2009 and is still going strong. Part of Ruger’s charm, longevity of product lines.

One thing that characterizes Ruger, and certainly characterized founder William B. Ruger, is a reverence for the firearms and firearm designers that came before. As an example, numerous design elements of the the Model 77 in any of its three generational forms were openly attributed to Peter Paul Mauser’s Model 1892 controlled feed / non rotating extractor design. No, Peter Paul did not design the Almond Joy or Mounds bar, and please don’t snort when you attempt to tell that joke. 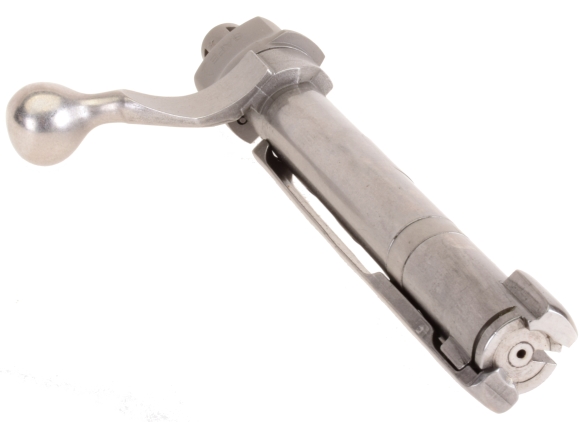 At the center of the Ruger Hawkeye action is the stout, one piece, twin lug bolt with non-rotating monster claw extractor. The bolt is lug guided within the receiver for slick travel. The slot in the bolt face is where the receiver mounted fixed ejector contacts the cartridge case head on opening stroke. The claw extractor picks up the rim of the cartridge being fed as the bolt moves forward, guiding the round all the way into the chamber. The extractor’s grip easily pulls empty brass from the rifle’s chamber, even those from my handloads. The blade ejector is not spring loaded to kick an empty out. Instead, the shooter controls the… zest of ejection based on how rapidly the shooter opens the bolt. Hunting; you just enthusiastically open the bolt to clear the chamber for a fresh incoming round. At the range, you ease the bolt back to catch the empty or to deposit them nearby on the bench.

The Ruger Hawkeye has a hinged floorplate and a capacity of 4 rounds with an empty chamber. The magazine can be emptied by cycling the bolt with the safety engaged, or by depressing the release button at the front of the trigger guard and opening the floorplate. As always, the safety must remain engaged and the chamber must be checked for empty after either approach. I know detachable magazines are the tools of a new generation, but I am good with a hinged floor plate. As far as capacity goes, I have never emptied four rounds into anything I’ve shot hunting and I have never found a need for a quick change of ammo type. Well, there was that Black Hills Ghost Deer back in ’68, but… Another time. 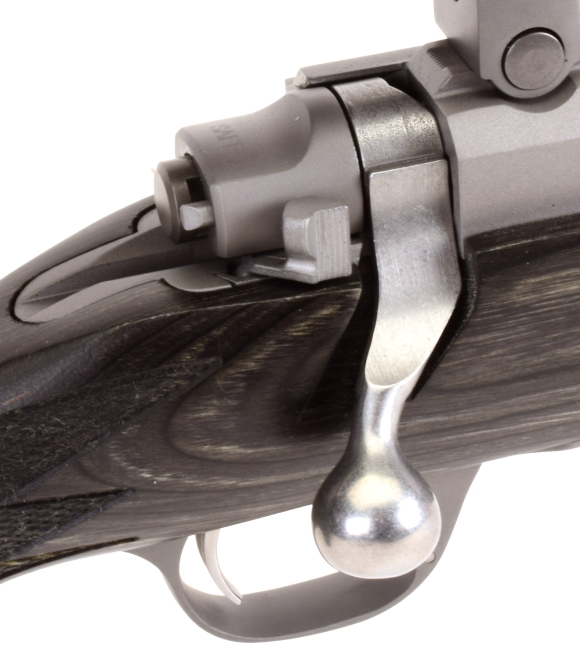 The three position safety provides safety off – position shown, half back – bolt unlocked safety on, full back – safety on and bolt locked in a closed breech position. Safety positions are positively located and they do not make a sound.

The stock minimal drop geometry works as a scoped rifle, keeping line of sight with optical center and face supported. The stock may be compact but, as noted earlier, it is adult hand size filling. The stock is rounded and contoured for handling, lacking the crude angular surfaces found on too many firearms. Good attributes for accurate shooting.

Gees, I hate that word “Journey”. It’s right up there with “man bun” and “man cave”. I don’t take journeys to discovery. I just sort of wander around making mistakes until something works. I’m bald where most man buns take residence. I have a messy garage without a refrigerator or designer storage, but I know where everything is. My theory is that terms like “journey”, “man bun” and “man cave” are the invention of women, who hope to privately snicker at men who use them. Men’s revenge? The “She shed”. Anyway…

There was a dark time in my life when cartridges with less than 130 grains of powder capacity were dismissed for use on anything larger than jack rabbits. I don’t know what happened. I began with a 30-30 WCF Marlin. Then, relocated to a place with flatter topography than upstate New York and Pennsylvania, where accomplished hunters pursued deer with the 222 Remington or 243 Winchester chambered firearm. 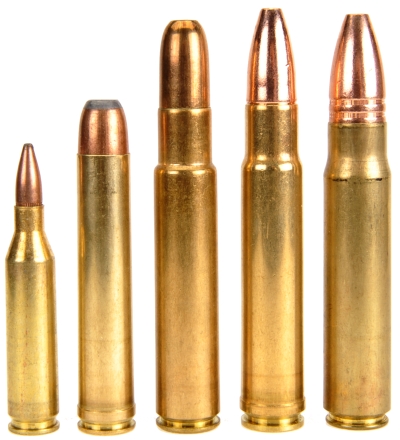 When my wife and moved our family to California, I was no longer braced by common sense hunters and I spent way too much time at the range and at the reloading bench collecting data. It was there that I worked my way through the big belted H&H, Weatherby and European Magnums up until the recoil and muzzle blast of a 500 Jeffery slapped me back to reality. Above L-R: 243 Winchester, 458 Winchester, 450 Rigby, 460 Weatherby, 500 Jeffery. 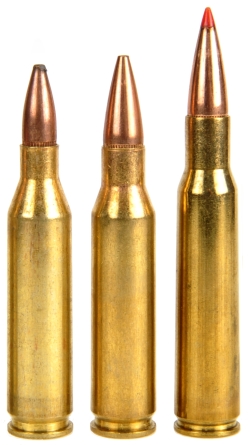 It came to me that no game I was hunting was large enough, and/or tough enough, to warrant those rounds suitable for the largest African quarry. Additionally, getting only fifty three rounds to a pound of smokeless powder was putting a damper on my handloading enthusiasm. Bullets at $10 per, and cases twice as much, did not reduce that reloading pain.

Deer and hog hunting with the 243 Winchester could be conducted without being beaten black and blue. A 243 Winchester easily has the trajectory and kinetic energy to be a 300 yard cartridge. Living in Maine, inside 100 yards is more typical, sometimes, inside 50 yards.

L-R: 243 Winchester, 7mm-08 Remington and 7×57 Mauser represent my current hunting rifles. While they get progressively more powerful moving left to right, practical ballistic superiority over the 243 Winchester does not. So why do I shoot them all? Why do I have a jar of pickled pigs feet in the refrigerator?

Some firearms hold special appeal, some hold a unique niche in my handloading activity, some offer greater bullet weight potential. As an example, the 7×57 Mauser can manage 175 grain bullets which are deep penetrating and broadly expanding, whereas the 243 Win is pretty much all in at 105 grains.

No, a 175 grain bullet is not necessary for deer, but it would be useful for larger elk or a heavyweight moose. Is elk and moose hunting in the cards? Nope, not at all; too expensive and I am not that hungry, but it is good to be prepared in the event I find myself in need of a 1,500 pound steak.

The 7mm-08 Rem shares the same ballistic space as the 7×57 Mauser. The difference is that there are thirty one factory loads for the 7mm-08 Rem and only nine for the 7×57 Mauser. Which sound very favorable for the 7mm-08 Rem, until we accept that none are available of either. But someday, when ammo makers stop filling federal stock piling and remember we are customers, the 7mm-08 will be the reliable fall back supply and the 7×57 Mauser will be my handloading toy. Which all takes me back to the 243 Winchester as optimal for a deer or hog hunting application… And, there are sixty one factory loads for the 243 Winchester and a full seven are readily available.

Yes, a 16.5″ barrel does influence velocity, but not accuracy 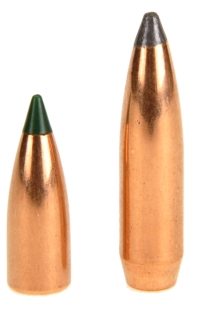 The 55 grain Sierra bullet, far left,  is a varmint type, but easily handles the 243 Winchesters velocity as it is rated for above 4,000 fps MV. The handload is 43.5 grains of Alliant Reloder 15, 2.630″ COL, large rifle magnum primer CCI 250. I wish the industry would stop using misspellings as product names. The rest of the world thinks we haven’t mastered spell checkers.

The 100 grain Speer bullet is a medium size game bullet… deer, hogs and similar. Its boat tail is of no great consequence other than for moving mass from the ogive to the tail where it can less adversely effect the bullet’s ballistic coefficient. It is an excellent bullet I have personally used for 243 Win, 6mm Remington and 240 Weatherby handloads. It performs well on game in a wide range of velocities. The handload is 46.0 grains of Reloder 22 with a COL of 2.625″, also with a large rifle magnum primer CCI 250.

The Factory 80 grain round is Remington High Performance Rifle and is intended for medium to large thin skin game.

Barrel length, beyond what is necessary to stabilize a bullet, has no measurable impact on accuracy. Its effect in on velocity and the kinetic energy that follows. With metallic sights, a longer barrel is generally more accurate, only in that it has a longer sight radius which aids the shooter in more precise sight alignment. 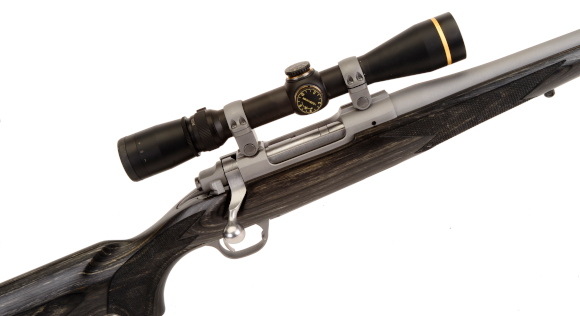 What can I add? The Ruger Hawkeye is like other Ruger firearms; well made in the U.S.A. with in house processes. Ruger is not a company that builds their firearms from buckets of parts sourced world wide. Yes, it means more U.S. jobs, but it also means better overall control of product quality and expeditious solutions to any issues that may arise.

The Hawkeye is a complete rifle, meaning that little things like swivel studs and scope rings make the rifle range or field ready as received. It is also a package value. About $60 – $80 these days.

Recoil is modest, manageable by even young shooters. The short barrel does make the Compact a little… barky. Not a mystery, but rather the result of relatively high muzzle pressure. Longer barrels dissipate more pressure before a bullet exists, which diminishes report.

Fit and finish is very good. Wood to metal fit is close. The barrel floats in the barrel channel to eliminate pressure placed along its barrel. The result is greater consistency of accuracy.