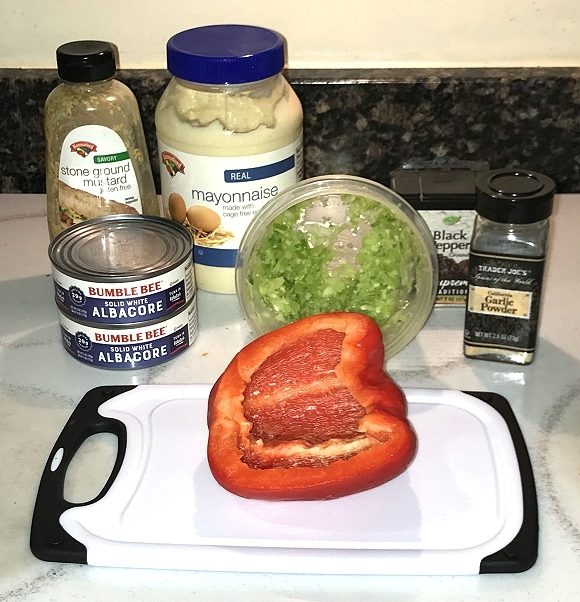 The thing I like about making my own tuna salad, is that it will have the composition, distinct flavor and multifaceted texture I enjoy. Tuna is pretty much tasteless, add: a half teaspoon of garlic powder, a half teaspoon of black pepper, a table spoon of stone ground mustard, four tablespoons of mayo, finely chopped 5 green peppers and 1 celery stalk, a quarter diced red pepper, and 10 ounces of drained solid white albacore tuna.and you have something to work with. 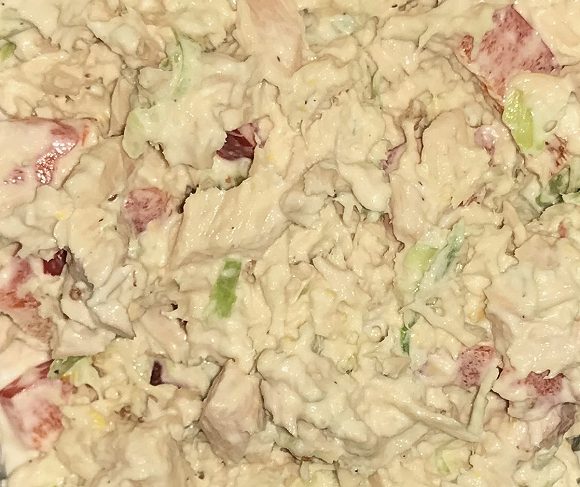 When it is prepared, it looks as above. Maybe a tad more appetizing. Oh! You thought the intention was to make tuna salad analogous to handloading? Actually, I am just peckish and I have a lot of transcribing from notes ahead of me, so tuna is on my mind.

Yes, like “Gentle On My Mind”, only without the virtuosity of the inimitable Glen Campbell. However, I do think your suggestion of using tuna salad as a handloading analogy is a good one. So let’s go with that… at your insistence 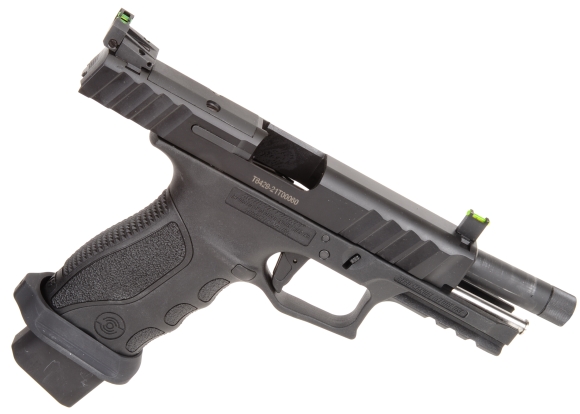 I was thinking about my product biases and how they might prevent me from appreciating other brands. As an example, I thought I did a poor job with the Stoeger STR-9S. Oh, there is a lot of detail and an honest representation. I just did not spend enough time with the product to discover what it is all about, what there is to appreciate. So I decided I would do a handloading project, using the Stoeger as the subject firearm and shoot it above and beyond more typical usage.

I liked the high capacity which allowed me to shoot lots of test batches with reduced reloading. I like the 4″ barre3l which promotes more optimal ballistic performance. Across several hundred rounds of live fire, there were no failures to feed or cycle, regardless supersonic and subsonic handload charges and bullet type. I did have a single failure to fire with what looked like a normal primer strike. The same round fired when fed through the pistol again. My conclusion is, I have no idea, but I am leaning to either an iffy primer or slightly over diameter round that dampened the primer strike. Opinions are like Democrat family members, everybody has one.

Beyond being able to formulate custom load data with experience and expertise, there is a bunch of money to save by handloading. The way that non handloaders dismiss this benefit is by comparing the cost of premium component handloads with the cheapest loss leader ammo sold at retail. In an apple to apple comparison, equal grade of components, handloads cost about half that of buying factory ammo. Yes, that is even after the hosing ammunition and component suppliers are giving firearm enthusiast.

My suggestion is to check the components you want to use, remember the cost of brass is spread over approximately 10x reloading cycles and that you can select faster powders that are consumed less per round without sacrificing measurable performance. My advice is to avoid dollar bullets that look like threaded pipe plugs, collets or a large phillips head Apex bit.. The most impressive aspect of $1/per pistol bullets is the price tag and the gullibility of those who consume them.

Warning: Bullet selections are specific, and loads are not valid with substitutions of different bullets of the same weight. Variations in bullet length will alter net case capacity,  pressure and velocity. Primer selection is specific and primer types are not interchangeable. These are maximum loads in my firearms and may be excessive in others. All loads should be reduced by 5% as a starting point for development where cartridges have greater than 40 grains in capacity and 10% for cartridges with less than 40 grain capacity following safe handloading practices as represented in established mainstream reloading manuals. Presentation of these loads does not constitute a solicitation for their use, nor a recommendation.

Supersonic/subsonic – During the day of collecting velocity data, air temp at our location was 78°F which put speed of sound at our location at 1136 fps muzzle velocity. With margin of error, anything below 1100 fps is considered subsonic. When used with a silencer, sound pressure is majorly dampened and there is no supersonic crack. Yes, it is possible to reduce loads other than those with a 147 grain bullet, but it makes little sense. If velocity must be limited to 1100 fps and lower, why not use the heaviest bullet for the greatest expansion and penetration? Sub 1000 fps were exceptionally quiet.

A combination of RCBS carbide dies and Lee taper crimp die was employed. The Lee die does a good job of applying a taper crimp and sizing a finished round to make sure it will chamber and extract cleanly from an auto loader.  No surprises, no overly compressed charges and OAL cleared chamber throat and magazines.